The Ultimate Guide to Contemporary Art

In this ultimate guide to contemporary art, we take a look at how we define art from the mid-20th century to the present day. How contemporary art has developed over recent decades and the different themes and movements which have represented contemporary art during this time.

What is contemporary art

There is no general consensus on when the contemporary art period began. The London based Institute of Contemporary Arts (ICA) recognises the start of contemporary art as 1947, which happens to coincide with the establishment of the Institute. At ARTraiders, we consider for the purposes of our publication, contemporary art to be art created post-war (WWII) in 1945.

The New Museum of Contemporary Art in New York chooses a much later date of 1977 for the beginning of contemporary art. Many scholars and art historians prefer a 1970s starting point to mark the “dematerialisation” of art throughout the 1960s. During this time artists diversified from the two traditional mediums of painting and sculpture to include conceptual art. Time magazine identifies the year 1970 as the birth of contemporary art.

What is it with our obsession to neatly pigeon hole such fluid conditions. This is why postmodernism is often considered the aftermath of modernism, or the result of modernism, the development of modernism, or even the denial of modernism. The transitory condition from modern to contemporary is not clear cut and nor should it be.

Whatever your opinion on the beginning of contemporary art, as already mentioned, at ARTraiders we define the term as post 1945.  This is to allow us to include such great movements as abstract expressionism and pop art in the contemporary era. And why not?

Contemporary art is a dynamic combination of materials, methods, concepts, and subjects that continues to challenge its boundaries. Contemporary art as a whole is distinguished by the lack of a uniformity and involves a wider contextual framework.

Now let’s take a looks at some the people and ideas that have moulded contemporary art.

The new media art movement is a broad and complex term used to cover work created or presented using any new digital technology. It is defined from other contemporary schools of thought by the medium used to create the work, instead of the style or form it eventually manifests. New media art is created using computer visual art, computer animations, robotic art, interactive art, 3D printed sculptures, video game artwork, and electronic music.

Digital art is common term used to describe new media art in general, however, digital art itself can be described as a sub-genre of new media art. Digital art is the process or end result of an artistic work created using digital technology. Digital art, at its core, is the visual art most resembling traditional contemporary art and its processes. The canvas and brush replaced by the tablet and stylus.

Digital art would appear to be the bleeding edge of the art world, but it has in fact been around since the 1950s, making it just as old as many of the other movements in this guide. Often referred to “computer art” in the past, early examples of digital art include the work of Ben Laposky, who used an oscilloscope to manipulate electronic waves and create images of the patterns, some of which can be found in the Victoria and Albert Museum.

Some examples of digital artists are, extraweg, real name Oliver Latta, who is an artist, director, and animator who uses all the main technological mediums to create his artwwork.+

Pop art is an art movement that emerged in the United Kingdom in the mid-1950s and in the United States in the late-1950s. The movement reached a crescendo in the 1960s.

Seen as either the end of modernism or an early manifestation of postmodernism, pop art straddles the transition of the art world at that time.

Another movement rooted in the modern to contemporary transitional period. Abstract expressionism is a term used to describe a new form of abstract art which was started in New York in the 1940s by Jackson Pollock and Willem de Kooning.

Gestural application of the paint allows the transfer of the artists inner feelings directly to the canvas. This can involve large sweeping brush strokes or gestural spraying of the medium onto the canvas.

Abstract expressionism is underrated as an art movement. You will often hear “anyone could do that”,  but closer examination of a real artistic example will show subtle layering, careful interactions and a very controlled application of the paint.

Along with pop art and abstract expressionism, minimalism can be considered one of the seminal art movements of the late 20th century. Minimalism was also born in the city of New York, and became prominent in the 1960s through artists such as Frank Stella and Carl Andre, as a rejection of the expressionist movement at the time.

Minimalism rejected personal expression of gifted individuals and presented geometrical shapes, with impersonal clean 90 degree lines. Minimalist art is non-referential beyond its materials and lines, and even colour has no reference beyond what you see in the physical. The art does work within the space it is created or displayed, which is why minimalism is often associated with architecture or home design. When referring to the visual arts we would use the term “minimal art” or “literalist art” to describe a minimalist piece.

Conceptual art is the term used to describe art where the idea is more important than the physical art object. Although, finding a consensus for a true definition can be problematic as the movement has diversified extensively since its inception.

The term originated in the 1960s, but is synonymous with the Young British Artists (YBA) of the 1990s who made the conceptual art famous through installations such as My Bed by Tracey Emin (1999; see image above) and The Physical Impossibility of Death in the Mind of Someone Living by Damien Hirst (1991), which consisted of a tiger shark preserved in formaldehyde in a vitrine.

Photorealism defines art which attempts to recreate photo quality images using various traditional mediums. The artist does not copy a photographic image as such, but one or several images can be used to compile the finished work of art. The movement began in the U.S and Europe in the 1960s as an evolution to pop art and as a counter movement to abstract expressionism.

Land art emerged in the UK and USA in the 1960s to counter the commercialisation of art and the emerging green movement.

Land art, also known as Earth art, is created directly in the landscape. The artist uses the natural landscape as the canvas and natural materials to created the expression.

The artwork can sometimes be inaccessible or difficult to view so the artist will record the work in photographic form to display in the gallery. 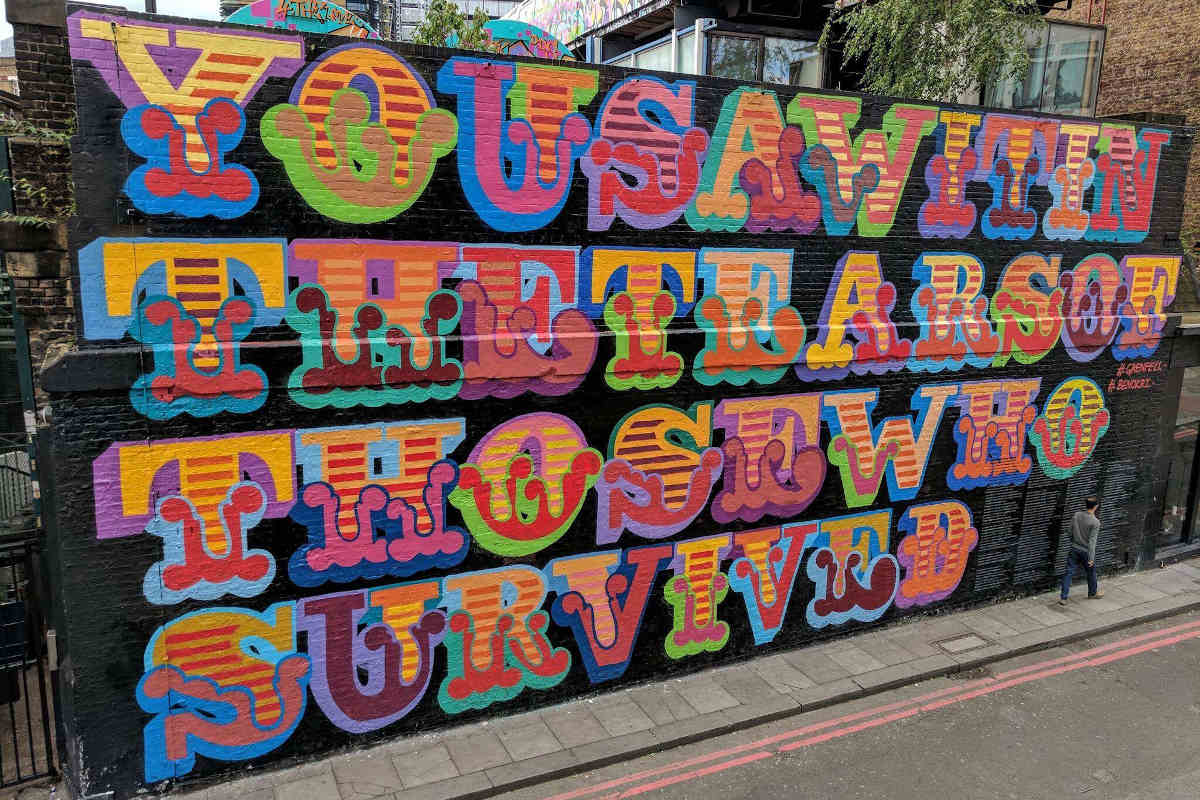 Urban art is a term used to describe all forms of art created within urban areas such as graffiti and street art.

Graffiti first emerged as form of expression on the New York subway system in the early 1970s, where artists ‘tagged’ or created murals with sprays paint and marker pens. This was a problematic beginning due to the illegal nature of creating murals on subway cars or buildings.

Graffiti has now been accepted and embraced as a part of urban life, with well executed murals becoming landmarks and tourist attractions.

Street art was a national progression from its graffiti roots to include all other forms of urban art such as installations or sculptures, which may or may not include graffiti elements.

2020-01-02
Next Post: Valentines Day mural in Bristol confirmed as Banksy